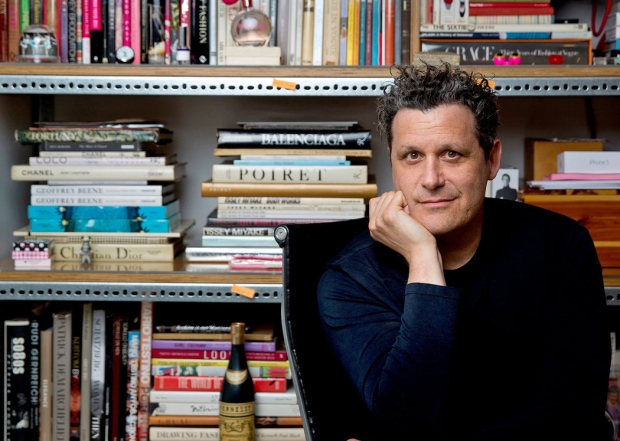 A few weeks ago, I went to see Isaac Mizrahi: An Unruly History at the Jewish Museum. I thought about what I might see at the exhibition beforehand as I sipped lemonade in a novelty chair at the across-the-street Cooper Hewitt Museum courtyard, but couldn’t really bring anything to mind besides bright colors and maybe some Unzipped footage.

When I finally relinquished my chair and took the walk from 91st to 92nd street, I found the Mizrahi exhibition itself to be refreshingly compact, with only three rooms with clothes and another small room dedicated to sketches. I was right about the bright colors, and this glorious full skirt and white tee combination was among my favorite pieces. I didn’t see a particularly obvious thread running through the first two rooms, besides, very broadly “color” and “texture,” respectively; the third room was dedicated disappointingly nondescript accessories in addition to pieces worn either on stage or screen, which were appropriately zany and over-the-top.

But then I walked to the end of the third gallery where there were screens playing clips of Mizrahi talking – panicking over his collection in Unzipped, spitting out fast, droll, blunt talk on QVC, and answering an impossible stream of questions correctly on Celebrity Jeopardy. His hyper-verbal charisma is so engaging, his unabashed confidence so delightful. Every seat on the benches facing the screen was full – I had to lean against a wall with other viewers who weren’t able to claim a spot. This was the heart of the exhibition; this is why we, a diverse group of museumgoers, were here: for Mizrahi, and not for his clothes.

I don’t think this detracted from the effectiveness of the exhibition; I found it thoroughly enjoyable and engaging. Although it was less thematically cohesive than other clothing exhibitions I’ve seen, it was also tightly edited, and I never felt overwhelmed like I sometimes do, say, at the Met. But nor did I feel unspeakably moved by any of the pieces like I do again, say, at the Met. It would definitely be lacking if not for the video footage, which I think says a few interesting things about Mizrahi as an artist, namely, what happens when your brand is your personality?

I was deeply troubled for what it meant for Mizrahi, who doesn’t have a signature running throughout his body of work. I literally wouldn’t have been able to pick out any of the pieces on display as one of his in the wild.  Mizrahi has made his complete lack of visual branding work for him by selling his clothes on QVC, where his face and personality is front and center. He is his own best salesman, more than any other designer in fashion history. But what will happen in the long run, when he’s not there charming an audience with his frenetic wit?

Other artists known for their personalities like Oscar Wilde and Andy Warhol have achieved brand longevity – but then again, they have extremely cohesive bodies of work. I thought about how Mizrahi could cement his artistic legacy through creative production. A signature accessory? A return to the runway? Something to do with his dog clothing line?? But then it dawned on me: he’s already done it. It’s Unzipped, the 1995 making-the-collection documentary that’s spawned a hundred other quietly contained, fascinating, and compulsively watchable fashion documentaries. His fashion line won’t outlive him, and that’s ok; he was at the forefront of a new art and entertainment genre, and helped the shape the modern perception of designer-as-celebrity and made fashion less of a niche cultural interest and more of a mainstream art form.

Isaac Mizrahi isn’t a strictly fashion person, he’s an arts and culture polymath (Alex Trebek can attest); a big personality also who happened to also make it as a designer. It’s perhaps even more fitting that he will be remembered for something beyond his design career, and for making a contribution to the culture at large.