Tom Hiddleston is covering major ground on the road to an image makeover after a humiliating summer.

Well, well, well, look who it is showing his sheepish and handsome face in the fall Gucci ads.

None other than Mr. Thomas William Hiddleston, actor, Shakespearean, and international punchline on a level of schadenfreude never before witnessed by human eyes.

After a summer of being a gossip site punching bag, human Muppet, and court jester to Satan, and along with losing the Emmy for The Night Manager and any shred of hope of landing the role of 007, Tommy is in need of a serious image overhaul. And what better than posing for the hottest luxury label in the world to regain one’s shredded dignity?

Tommy is a good fit for Gucci because of the new aesthetic direction Alessandro Michele has taken with the brand in the last year and a half. Gucci now codes for quirky, oddball glamour, with its Wes Anderson color palettes, zany accessories, and an overall aesthetic of weirdo chic. Tom is both classically handsome and very normal whilst being a pale, weirdo icon because of his roles in Marvel films and cult-y flicks like Only Lovers Left Alive. It has been sneeringly (and accurately) speculated that Tom wanted to shed his comic-con fanbase and become more of a mainstream movie star, presumably using a high-profile “relationship” with a singer as a spingboard (said singer who is “as big of a danger to the world as ISIS,” as my mother has put it.) But fronting a quirky brand like Gucci, instead of something like an ultra-boring but alpha male suit brand, is a gesture of atonement to disgruntled Dragonflies – I’m still in here, says Tommy. Forgive my desperation and moment of true, fever-dream, out-of-my-mind, insanity. Remember how good I was in Deep Blue Sea?

Tom’s also good for Gucci because of the label’s quest to embody the spirit of bohemian, English eccentricity. Michele, having worked for Gucci in London when under Tom Ford, is my peer in Anglomania, and has implemented a number of initiatives to imbue the Italian label with a British sensibility over the past few seasons, including holding a show at Westminster Abbey, forging a long-term partnership with Chatsworth House, where the Cruise 2017 campaign was shot, and appointing scions of offbeat, British glamour to be brand ambassadors, including Alexa Chung, Florence Welch, and, in a stroke of genius so sublime it makes me want to cry, Vanessa Redgrave. Tom’s a good celebrity to add to this stable, because he’s so very English – he literally looks like he could be an English gentleman from any of the last ten centuries – and yet current, handsome, and a little bit quirky.

This partnership happens to occur precisely when said gentleman is in need of some good press. No other brand is on Gucci’s level in terms of Instagram-mania, excitement, critical acclaim, and just really really cool clothes – exactly the kind of associations Tom needs after his summer of PR thirst exploded in his face over and over again like trick birthday candle. I’m convinced that Gucci is the only label that could rehab Tommy’s image in the public eye just at this moment, and I grudgingly admit that I feel relieved that Michele extended his hand to Tom in a gesture that marks Tom as pathetic no more, but actually cooler, and certainly more fashion-forward, than he was before his bummer summer.

The ads are great, too – saturated confections of satin and velvet dandyism, complete with  Judith Light dogs and feelings of isolation and anxiety that’s all both beautiful and slightly repulsive to look at. I applaud the execution and I think Tom bring something patrician yet geeky to the mix that makes him pitch-perfect embodiment of the Gucci look today.

I think young Tom has a ways to go on his path to media redemption and restoration to the title of the Thinking Woman’s Internet Boyfriend, but I can’t think of a better way to start than by starring in an ad like this for a brand like Gucci. Alessandro Michele might also want to consider a second career in celebrity image rehab. Move over Dr. Drew.

My favorite of the series. Love the colors in this shot. Also the Mary Janes and the parakeet.

My least favorite shot of the five, but I like the dog on the right’s Farrah bangs. 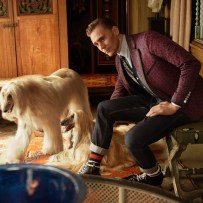 The zany sock makes the shot. 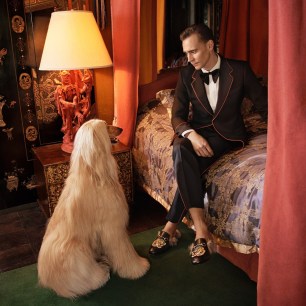 The poster for the upcoming Wes Anderson Film. 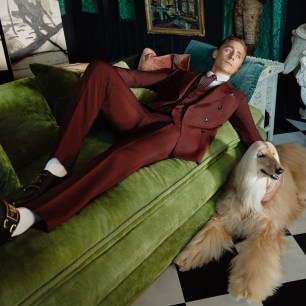 Fizgerald-y. Need this suit for work.

Striving for this look every day.

From Redgrave’s takeover of Gucci’s Snapchat! She is 79 and can use Snapchat better than I can!!!

Michele and Redgrave behind the scenes of the Cruise ’17 shoot. 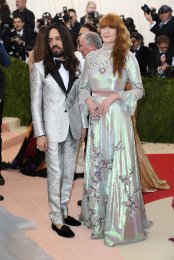 Michele and Florence Welch at the Met Gala. 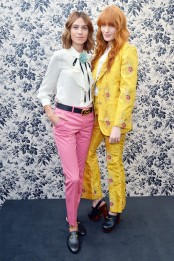 Alexa Chung and Florence Welch at a Gucci event in LA.