Hmmm, is the framing of this photo of Valentino Co-Creative Directors telling? Maria Grazia Chiurri is positioned in front of Pierpaolo Piccioli and staring up, while he looks squarely at the camera. If today’s news is any indicator, then yes, this 2015 photo might tease that Chiuri was considering moving on a over year ago. And that my art history classes paid off and that I paid attention to the body language episode of Tyra circa 2008.

In a completely stunning move, Dior appointed Maria Grazia Chiuri as its new creative director following the departure of Raf Simons earlier this year. Usually  whispers trickle around before an appointment, but that wasn’t the case with Chiuri—I stared at my email inbox completely agog with surprise when the news broke this morning.

Surprised I may be, but I am also delighted. Maria Grazia Chiuri is an incredible designer, and has co-created some of the most beautiful, intricate, and feminine pieces of ready-to-wear and couture humanly conceivable during her nine-year tenure at Valentino—pieces so simple in line yet opulent in fabric so as to make one gasp.

Chiuri will be brilliant at Dior; she understands the pressures and rigor of working at a mega-house, and is a near-perfect match in terms of aesthetics with her appreciation for simplicity and graceful femininity. Beyond the tulle and Roman richness, she also knows how to make money. Chiuri and Piccioli pioneered the incredibly commercially successful Valentino Rockstud accessory line, which, six years later, the public is still hungry for. She knows how to walk the fine line between accessibility and exclusivity, and realizes the importance of refreshing and building on cult items each season to maximize their relevance. Chiuri will also be Dior’s first female creative director in its 70 year history—ironic for a label whose image is so tied up in femininity.

As exciting as this news is, it’s not without a scoop of bitterness. I’m so sad to see this harmonious era of exquisite design and seamless execution of Valentino’s sensibilities come to an end. It never occurred to me that Chiuri was even being considered for this role because I figured that she and Piccioli were a package deal and firmly ensconced at Valentino for many years to come.Why did Dior pick only Chiuri and not the pair? Will Chiuri and Piccioli be any good without the other? Perhaps Dior execs had special insight into their creative process to be able to make that call. We will have to wait and see on these. But as to the question of whether or not Valentino is upset that his natural heir has chosen to go elsewhere, well, I think we have our answer from Giancarlo Giametti’s Instagram today. No one does Italian drama quite like Valentino! 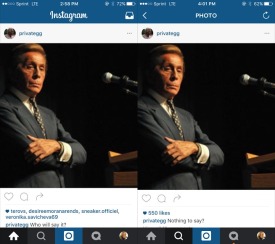 By the difference in picture length, he appears to have deleted the left image and reposted it with a new caption.

What a dream team.