The new ads are in, and the results are not great my friends. Brands and spokespeople were mismatched, art direction was lackluster, and ads had a somber quality to them, perhaps stemming from the recent upheaval in the industry and the hit that the luxury markets have taken in China. Let’s discuss.

Oh. Oh dear. This keeps eliciting laughs from me. I know Ralph Lauren is under new management and in desperate need to project a younger, cooler image (may I remind you that Ralph Lauren is a major sponsor of Masterpiece Theatre). It’s like they watched The Grapes of Wrath  on a TV with poorly-operating antennae, put on a blindfold, and threw a dart at a young celebrity that codes for cool and edgy. This is a tragic mismatch, and the result is schadenfreudeish. The corresponding video is even worse, bringing this depression-era Madewell shopping spree to life — the only redeeming quality of the digital component is the presence of a hedgehog.

Who would be a better face of Ralph Lauren (providing there’s better art direction)? It’s tough to say, seeing how this big brand has become amorphous and bloated by offshoot lines in the past ten years. I would go for an all-American face, like none other than Lauren Bush Lauren. She’s close to the brand, yes, but she’s an accomplished social entrepreneur with ties to two American dynasties — and Ralph Lauren is all about living the American dream. And if Tom Ford can star in his own campaigns, LBL can advertise for her in-laws. 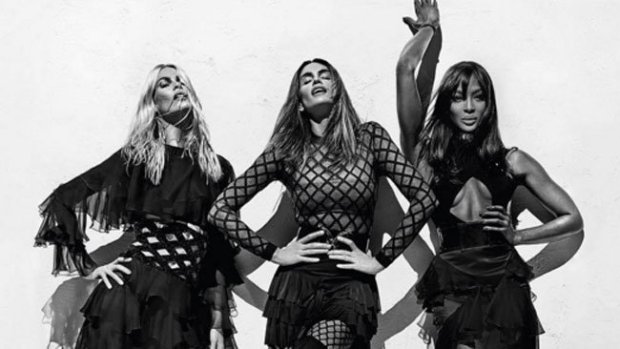 This is great. It’s all the glamour and drama associated with Balmain, but without the off-putting high-maintenance flashiness. The black and white is subdued, and a nice departure from the garish colors that we’ve seen from Balmain recently, but there’s so much movement that it’s still electric — Cindy’s face and body is exquisite here.

Choosing the original Supers to font this campaign was a great move, because it capitalizes on 90’s nostalgia, and restores some sophistication to the brand after last season’s Jenner sisters ad. It’s also nice in conversation with the Balmain x H&M campaign, which featured the “Supers” of today, Gigi, Kendall, and Jourdan, whose looks mirror those of Claudia, Cindy, and Naomi.

Burberry is catering to a younger crowd with this campaign, with its choice of up-and-coming young models like Ruth and May Bell and Dylan Brosnan, its debut of Snapchat (why?), and the grittier aesthetic portrayed here with a Juergen-y high-exposure flash. This makes sense, given that Burberry’s sales were down the last quarter, and Christopher Bailey has been under pressure to prove himself as CEO. Digital innovation under his guidance got the brand to where it is today, so it’s natural that he would double down on this strategy when he’s feeling the heat.

I’m not sure this is the right tack, however. It’s incredibly alienating to more sophisticated buyers and cheapens the brand’s heritage history by making it seem young and ephemeral. Although it’s important to stay relevant to a younger demographic, teenagers aren’t the group with the purchasing power Burberry needs. They need to keep their messaging consistent with what they did in their holiday campaign, and sell aspirational, inclusive, glamorous, British sophistication, which is what they do best.

Finally! Someone took my advice and put Zoë Kravitz, intriguing chameleon of cool pedigree, in an ad campaign. I love the sleepy, romantic panned out shot of the two women, but the close-up shots are empty, uninteresting, and tell me nothing about the brand.

This is not a great way for Alexander Wang to end his short legacy at Balenciaga — this looks hastily done and doesn’t come across as a thoughtful farewell. If he were going to cop out, he ought to have shot Kravitz holding the Le Dix bag and called it a day. (Does anyone know if the label will continue to make these post-Wang? If not, I’ll need to acquire a loan immediately.)

Just when you thought this high school production of Of Mice and Men couldn’t get any worse, Hailey Baldwin shows up.

Claudia, Cindy, and Naomi for Balmain

Claudia, Cindy, and Naomi for Balmain

Ruth and May Bell for Burberry. Offputting.

Misha Hart for Burberry. I loathe this. 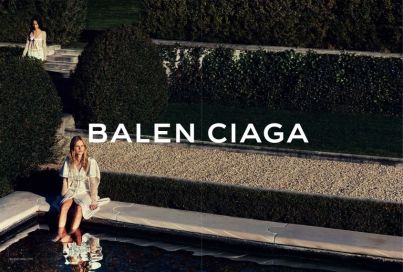